Before leaving for Sundance I was filled with anxiety; anxious to get there, scared of what to expect, and extremely nervous because I had absolutely no idea what I was doing. Questions began to flood my mind as I bordered the plane to Park City, Utah: How do I schedule and choose my movies? What the heck is the e-waitlist, and what am I supposed to do with it? What if I don’t make any friends and I’m stuck spending this whole week alone? As all of these things flooded my mind on the plane ride there, I was met with a sudden relief as soon as we landed in Park City. These things that were causing me so much anxiety just dissipated as I exited the plane.

Once we all got settled into our rooms, the first day in Park City was ready to begin. We all headed out for a bite to eat, before unpacking and getting acquainted with one another. Within the first two days I learned how to plan my movie schedule, I studied the transit bus schedule like it was a test, and I began new friendships that will last a lifetime.

Park City is one of the most beautiful places I have ever been, and covered with thousands of people that are there to watch films and learn from the greats makes it even more beautiful if that’s possible. There are lots of things to do that are affiliated with Sundance, there’s lounges and free snacks all along Main Street. Also there is a smaller festival that goes on during Sundance that I enjoyed very much called Slam Dance. Being able to experience both of these festivals together was a dream come true.

Getting to watch these films as they premiere are a once in a life-time experience. Picking apart the cast and crews brains in a Q&A, you really can’t get much better than that. But wait, being in a room full of people that share the same passion for movies as you do, now that’s breathtaking.

Overall I couldn’t think of another place that could’ve made a bigger impact on me as a person and a film student.

I am taking away knowledge from some of the most famous directors and actors of our generation, I am coming back home with friendships that I never thought I would have, and I got to experience a film festival and get college credit. If you are thinking of taking a trip to Sundance in the near future, do it with some classmates and study away!! 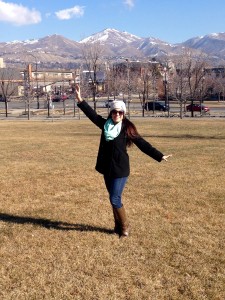