Attending the study away program to Park City has been an interesting and truly fulfilling experience in my filmic education. Programs like studying away to Sundance Film Festival, Film 399, and Film Capstone are vital points in a film student’s education. Capability to not only involve ourselves in the process of film making, but also the business and the culture of film as it unfolds in a festival setting is like nothing I draw on during film studies courses.

Planting oneself in the minutia of the town, conversing with reporters, film goers, producers, and actors allowed me to gain new perspectives and opened the doors to new journals and other lesser known festivals I had never known of before. Eating at restaurants in central Park City is edifying. People converse loudly and friendlily with one another and are more than willing to share information, contact details, experiences, and recommendations of the actual content screened at the festival.

The films themselves are cut from a hugely unique cloth as well, and are far from the standard movie-going fair. Attending packed screenings of obscure films with interesting like-minded people discussing upcoming projects and what brought them here fed my impetuous nature and brought along much more understanding of the festival circuit. One of my few disappointments comes from simply the lack of time that we as a class were able to spend at the festival.Five or so days is such a short time, and while I know I would not be satiated had I been there for the duration, I did miss out on some panels, films, and opportunities to meet with industry people that I would have had we even stayed to that Friday. 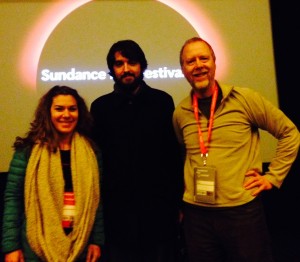 The Sundance Study Away Program is without hyperbole one of the most useful and important features to the budding WKU Film Program.