We [WKU film faculty in the School of Journalism and Broadcasting] have been running a film festival here at WKU for some time now, and in recent years have also encouraged our students to volunteer at the Louisville International Film Festival and the Nashville Film Festival.  These festival experiences have greatly contributed to our students’ understanding of film culture and the film business beyond the usual Hollywood theatrical releases.

When we realized that the Sundance Film Festival, arguably the most famous and influential festival in the United States, fell within WKU’s winter term this year, it seemed a perfect opportunity to expand the festival experience for WKU students.  We designed the course in the spring of 2013 with the help of the WKU Study Away Office, and ultimately had 23 students sign up and travel to Park City for the 30th anniversary of Sundance.

In addition to their onsite experience at the festival, the students completed an online portion of the course where they read and wrote about the history of American independent film with a particular focus on the influence of Sundance.   As you will see from the photos in this blog, we even had an official Robert Redford sighting! 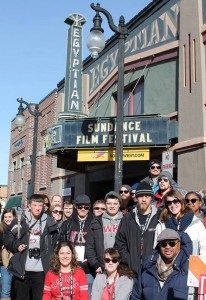