So they put up protective glass.  I’m not sure Banksy would approve. My first Bansky. In Park City.  At the Sundance Film Festival.

Here are two dogs that were the real stars of the festival.  Ralphie & Obvi.

They changed its policy by introducing an e-waitlist. 2 hours before every showing you signed up for a number.

If you didn’t sign up in 30 seconds, all the e-waitlist spots were gone. The server crashed. Many people hated the e-waitlist. I got into everything except one showing. Some weren’t so lucky.

Here’s a fan of “Dead Snow: Red vs. Dead” dressed as a nazi zombie at the midnight premiere. 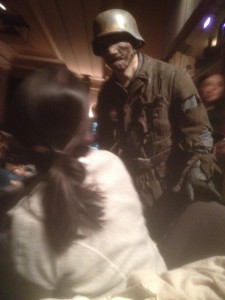 He snuck up on this girl and scared the daylights out of her. She ended up falling asleep during the screening. I politely told her to stop snoring because some of the cast were sitting behind us.

Because I had the adrenaline pass, which got me into movies before 11am and after 10pm, I was getting 4 hours of sleep every night. On this early morning, the buses were slow.

After waiting 30 minutes, I decided to run. It was only a mile, I thought, but the mountain air almost destroyed me. I caught my breath at a stoplight and looked at my phone. I had 10 minutes to get to the theater. No way. Then I heard a woman say, “Do you need a ride?”

I turned and saw a Sundance volunteer leaning out of her driver’s side window. Cars were backed up. She didn’t care. She drove me to the theater. I got there with 5 minutes to spare.

The Sundance Film Festival is the old cliche: a life changing experience.